Kansas Legislators have agreed to hold 14 public hearings across Kansas on the redistricting process. The meetings will be open to the public as well as streamed virtually. Transparency during this process is the only way to rebuild public confidence following statements by top state GOP leaders advocating for political gerrymandering. During this process, it is incredibly important that we preserve the core of Kansas’s congressional districts in order to protect communities of interest who benefit from cohesive representation in congress. Any major changes to the current congressional districts will disproportionately impact minority communities who already struggle for representation. 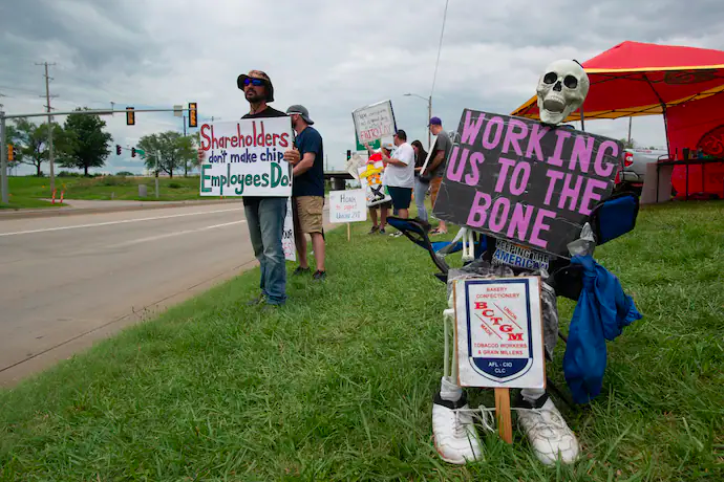 Hundreds of Frito-Lay workers in Topeka are striking due to forced overtime and up to 80 hour work-weeks. Workers in Topeka are being pushed to the brink as the factory has increased production due to a pandemic surge in demand. Workers are forced to work 12 hour shifts seven days a week and often only have eight hours between clocking in and out. This leaves them with limited time to see their families, run errands or even get adequate sleep. The KDP stands firm in its support of the Frito-Lay workers and their demands for reasonable working hours and conditions.

In an effort to ramp up training for upcoming elections in 2021 and beyond, the Kansas Democratic Party, together with the DNC Best Practices Institute, are excited to offer a series of virtual trainings over the course of the next few months. These programs will enhance the skills of progressive activists and volunteers by ensuring comprehensive training is free and accessible for Democrats all over the country. The training and its description is listed below:

District Judge David Hauber also determined the entirety of Senate Bill 40 is unenforceable, effectively wiping out a Republican-led charge to restrict the governor’s oversight of emergencies. The decision is a response to novel legal challenges filed by parents upset with mask mandates and other policies in the Shawnee Mission school district.

In a 27-page ruling, Hauber relentlessly criticizes the Legislature’s disregard for due process and separation of branches of government, as well as the attorney general’s “fantastical” legal arguments.

“Under the guise of giving local governments the authority to address specific pandemic issues, SB40 actually hobbled local pandemic measures by ensuring that lawsuits would be filed, aided by swift court action,” Hauber wrote. “Many local units of government simply capitulated under the pressure.”

(The Kansas City Star) – Last week, we were joined by a bipartisan group of stakeholders and legislators in Wichita to celebrate commonsense legislation that will strengthen Kansas’ economy and support our workers in communities large and small, urban and rural, all across the state.

Among other provisions, Senate Bill 127 amends driver’s license law to allow Kansans with suspended licenses to drive to work and school while paying off fines, and it waves the $25 application fee for restricted driving privileges.

Not only is it the right thing to do to ensure that no Kansan is denied the ability to drive to work or to school because of their inability to pay a fine, but it’s also essential to growing our workforce.

The Kansas Department of Revenue estimates that more than 213,000 Kansans have suspended licenses — and 70% of those are related to issues paying fines and court fees.

Through SB 127, we get these Kansans back on the road — and back to work — quicker.

Schmidt, a candidate for governor, signed on to a letter with 20 other attorneys general in their opposition to how the Equal Employment Opportunity Commission and the Department of Education are interpreting the court’s ruling.

The EEOC and the Education Department last month issued guidance for how they might apply the court’s ruling, which found that federal employment discrimination law protects LGBTQ workers.

The court found in three cases rolled together in one decision that Title VII of the Civil Rights Act of 1964 bars employers from firing someone because of their sexual orientation.

“The Supreme Court’s decision…is a historic milestone that resulted from the struggle, sacrifice, and vision of many brave LGBTQ+ individuals and allies who had championed civil rights for the LGBTQ+ communities,” EEOC Chair Charlotte A. Burrows said when the guidelines were issued last month.

(Kansas City Star) – Speaking to a small group at a Leavenworth, Kansas, town hall in his 2nd Congressional District earlier this month, Rep. Jake LaTurner was in campaign mode.

Before taking questions, he stressed the urgency of returning the House majority to Republicans in 2022.

“We have to take back the majority. That’s not just a punchline,” LaTurner said. “The Speaker of the House decides everything from what bills come to the floor to what soap you have in the bathrooms. Majority rules in the House of Representatives.”

But LaTurner couldn’t be sure that any of the 12 individuals who turned out at the Leavenworth Public Library would even be capable of voting for him next year.

The upcoming redistricting process, based on the results of the 2020 census, injects a measure of uncertainty into LaTurner’s bid for a second term. The GOP supermajority of Kansas lawmakers, who will draw new state legislative and congressional lines, could decide to make Kansas’ 3rd District, represented by Democrat Sharice Davids, more competitive for a Republican.

(The Topeka Capital-Journal) – Haven, Kansas, is about the last place most people would expect a debate on critical race theory.

The small town of 1,200 people halfway between Hutchinson and Wichita is a far cry from New York City or Chicago or other larger districts that have rethought the teaching of issues of race and American history — moves that have embittered conservative lawmakers nationally.

But as the debate surrounding CRT, primarily taught at institutions of higher learning, has divided educators, legislators and parents, one member of the Haven Unified School District 312 board decided they needed to take a stand.

Board member John Whitesel introduced in May a proposal in response to the debate, though it goes beyond the academic definition of critical race theory.

The language bans training or teaching that professes that “one race or sex is inherently superior to another race or sex,” that an individual is inherently racist or sexist because of those characteristics or that a student “bears responsibility for actions committed in the past by other members of the same race or sex.”

(The Topeka Capital-Journal) – Frito-Lay workers on strike in Topeka are searching for other employment opportunities, pulling from personal savings and even turning to family members for help, as they seek to support themselves during a strike that doesn’t have an end in sight.

This is the second week of the union-led labor strike outside Topeka’s Frito-Lay plant, 4236 S.W. Kirklawn Ave. The strike began just after midnight July 5.

“Those of us who are out here every day, there’s a sacrifice we’re making,” said Esther Fanning, who is participating in the strike after five years with Frito-Lay.

For Fanning, that sacrifice has partly come in the form of not getting to throw a normal birthday party for her twins, who turned 9 this past weekend.

“I made a sacrifice of having my kids’ birthday here at the picket line,” Fanning said. “We had a little happy birthday. We had some ice-cream cake. I told my kids, ‘When I leave you guys, I come to my family here at work.'”

(CNN) – Tens of millions of families have been sent the first payment of the expanded child tax credit, the Internal Revenue Service and the Treasury Department said Wednesday night. The beefed-up credit will provide them with extra funds each month through the end of 2021 along with a tax break next year.

The payments were approved as part of the Democrats’ $1.9 trillion stimulus package that President Joe Biden signed into law in March. The first installment totaled $15 billion.

The infusions may offer the greatest benefit to low-income families, cutting child poverty nearly in half — but the extra cash will also go to better-off American families.

Here are four things you need to know about the expanded child tax credit:

The full enhanced credit will be available for heads of households earning $112,500 and joint filers making up to $150,000 a year, after which it begins to phase out.

(KWCH) – The USDA will now consider issuing new rules defining when meat can bear ‘Product of USA’ labels. The measure comes with an executive order signed by President Joe Biden.

The order clarifies what meat products can be labeled as products of the USA. It also increases market opportunities for ranchers to sell their products for a fairer price.

The order moves to protect farmers and ranchers against unfair practices by large meatpackers and other businesses, making it easier for farmers to file complaints with the USDA regarding pricing practices and protect them from retaliation when they file those reports.

Also included in the executive order is a measure proposed by Senator Jerry Moran that would ultimately help small meatpackers get certified to sell their meat in other states.

(The New York Times) – President Biden and congressional Democrats vowed on Wednesday to push through a $3.5 trillion budget blueprint to vastly expand social and environmental programs by extending the reach of education and health care, taxing the rich and tackling the warming of the planet.

The legislation is far from passage, but top Democrats have agreed on working to include several far-reaching details. They include universal prekindergarten for all 3- and 4-year-olds, two years of free community college, clean energy requirements for utilities and lower prescription drug prices. Medicare benefits would be expanded, and green cards would be extended to some undocumented immigrants.

At a closed-door luncheon in the Capitol, Mr. Biden rallied Democrats and the independents aligned with them to embrace the plan, which would require every single one of their votes to move forward over united Republican opposition. But several moderate lawmakers who are crucial to the plan’s success had yet to say whether they would accept the proposal. 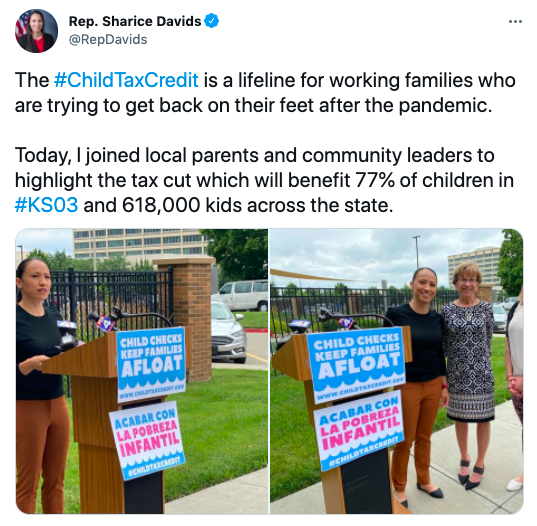 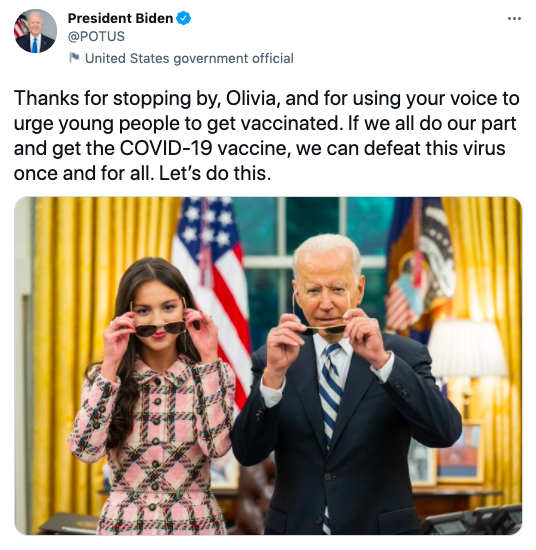 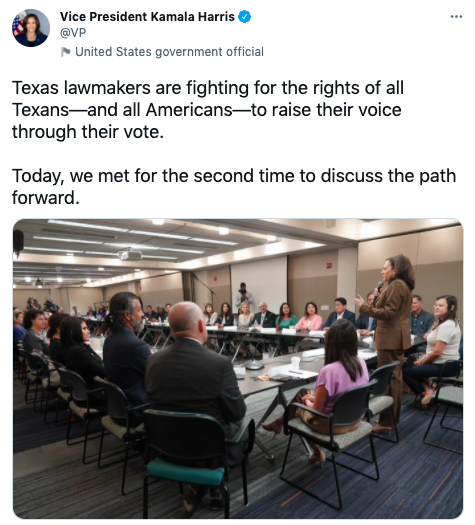 Paid for by the Kansas Democratic Party, Yolanda Taylor, Treasurer